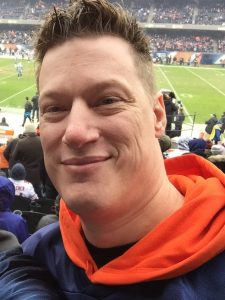 Jason was born on Feb. 11, 1975 in Clinton, Iowa, the son of David and Susan (Geltz) Baker. He graduated from Clinton High School in 1993. After graduation, Jason served the US Marine Corps in Hawaii and Japan. For the last 15 years he worked at ADM in Clinton, filling roles at the Corn and Cogen facilities. Jason
enjoyed gaming, drawing, golfing, bowling and cooking. He was also an avid Dallas Cowboys fan and enjoyed almost anything from Marvel or DC. Jason will be missed by his loyal and loving dogs, Harley and Negan.

Jason is survived by his fiancée Stephanie Marx, his daughter, Ella Baker of Clinton; his brother, Travis (Jennifer) Baker of Camanche; his sister, Tonia (Jeff) LaShelle of Thomson, IL; his mother, Susan Baker of Clinton; Stephanie’s parents Don and Stacy Gibson of Sabula, IA and several nieces & nephews. He was preceded in death by his father, grandparents, and aunts & uncles.