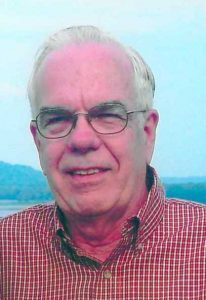 James Louis “Jim” Hilgendorf, age 86 of Clinton, passed away Friday, June 25, 2021, at Mercy One Hospital. A Mass will be celebrated at 10:30 AM on Wednesday, June 30, 2021, at Prince of Peace Parish. Visitation will be from 4:00 to 7:00 PM Tuesday at the Pape Funeral Home. Burial will be in St. Irenaeus Calvary Cemetery. Pallbearers will be Andrew Hilgendorf, Lucas Hilgendorf, Steve Till, Kerry Krause, Tim Till, Rick Till, and Mark Cooley. Honorary pallbearers will be Lisa Kettler, Paul Hilgendorf, and Linda Waddell.
Jim was born in Clinton on August 15, 1934, the son of Louis John and Florence Virginia (Lollich) Hilgendorf. He graduated from St. Mary’s High School in 1953. He served with the U.S. Army in the Signal Corps during the Korean War. Jim married Marlene Till on October 9, 1965, in Bellevue with Fr. Francis Lollich officiating. He was employed at E.I. DuPont for over 43 years retiring on March 31, 1997. Jim was a member of Prince of Peace Parish, Knights of Columbus and the St. Irenaeus and St. Boniface Cemetery Boards. He enjoyed spending time with his family and attended many events for his children and grandchildren. Jim collected trains, finished many woodworking activities, and spent many hours helping his children build their homes. As a member of the former St. Irenaeus Church, Jim was very active in all church functions, especially renovating the church basement and building the Jackson Center.
Jim is survived by his wife Marlene; 4 children, Michael James (Michelle) Hilgendorf of Clinton, Ann Marie Hilgendorf of Iowa City, Very Rev. Patrick J. Hilgendorf, V.F. of Ottumwa, IA, and Matthew Louis (Mindy) Hilgendorf of Clinton; 2 grandsons, Andrew and Lucas both of Clinton; 2 brothers, Don (Sharon) Hilgendorf of Clinton and Bill (Susan) Hilgendorf of Mt. Carroll, IL, and several nieces and nephews. He was preceded in death by his parents and 3 brothers, John, Jerry, and Tom. A memorial has been established in his name for Catholic education. Online condolences may be left at www.papefh.com.