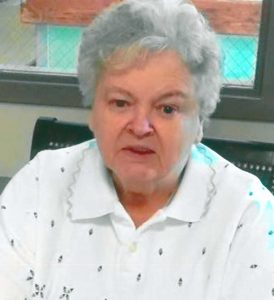 Dixie L. (Eversoll) Feldpausch age 80 of Clinton, passed away Saturday Nov. 20, 2021 at The Alverno. Cremation rites will be accorded. Memorial service will be held 11:00 AM Tuesday Nov. 30th at the Pape Funeral Home. Visitation will be held Monday Nov. 29th 4 – 7 PM at the Pape Funeral Home. Burial will be at St. Boniface Cemetery, Clinton. Online condolences may be left at www.papefh.com.

Dixie was born on March 8, 1941 in Clinton to John and Eva (Wright) Eversoll. She married George Feldpausch on March 18, 1971 in Clinton, he died in 2006. Dixie was a homemaker and worked as a cook at the former Wyndcrest Nursing Home, Clinton for over 15 years. She attended the former Salvation Army Citadel, Clinton. She enjoyed sewing, crocheting, puzzles, and spending time with her kids and grandchildren.